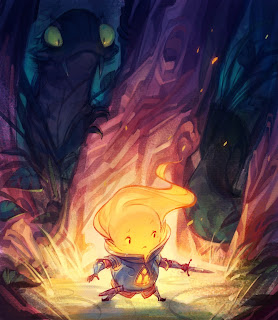 *A weather-worn traveller pushes open the creaking door, stirring a cloud of dust up from the floor.  Every surface shifts with the inrush of new air. Motes swirl in beams of light, dark shapes scatter for the corners. The space is warm and dry- faint, old smells bring the walls close.


The traveller unloads a heavy pack and sets it in the doorway, stepping heavily across the floor, he leaves a wake in the glittering, unswept floor. Sweeping cobwebs away from an untended corner, he stoops to peer at the uncovered thing: A Blog.*

Wow.
It's been over a year. To be precise it has been four hundred and fifty seven days since I last posted here on Happy Rock. Too long, friends.

So much has happened. Every time I've thought about setting something down, I was stalled by the sheer number of things to talk about. Inevitably something new would come calling before I had a chance to properly stop and think.

In the time since I've last posted, I've become a published illustrator for the second time- The Curse of Maleficent hit shelves and was a success- bringing lots of new folks to the web with kind things to say about my work- thank you, and welcome :) 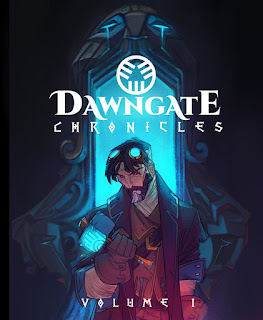 The Dawngate Chronicles rose and fell- a comic project telling the story of Waystone's (ultimately, ill-fated) MOBA. I was the lead artist, along with my great collaborator, John Loren who took on color and background painting. For the most of last year I got to live my dream of working full-time on comics- and it was an exhausting blast.

I will never forget Eidolus, Renzo or Zeri- they are characters that stick to your ribs. The team we had was a glorious meeting of the minds- Dave Cerra, Hunter Howe, Chris L'Etoile and Sam London- stalwart fellows, and just few enough gourmet cooks-in-the-kitchen to actually get a comic to the web three times a week!
It certainly tested my speed and cunning.
I kept meaning to come around and properly eulogize the project when it all fell apart, but I never managed to bring myself to do it. It's always sad when things end- but we had a hell of a run.

After 38 Studios, it was a relief to work on anything at all that saw the light of day! There was a Dawngate subreddit, there were memes, I got to livestream for fans at PAX! I met so many amazing people- you guys are wonderful.

Livestream. I believe it's been since last posting that I've taken up the habit.
Lately, I've been streaming on twitch- sharing the time and a few rousing Disney songs with the brave and the few willing to come watch me make a fool of myself. 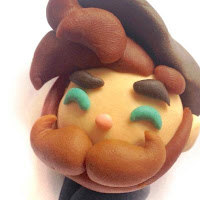 I worked for Hasbro on the Play-Doh team- stuff I did for over 6 months that I'm very excited about, but won't be able to talk about for some time yet. Suffice it to say, it was a great break from my usual mediums and my fingers still smell faintly of Doh :p 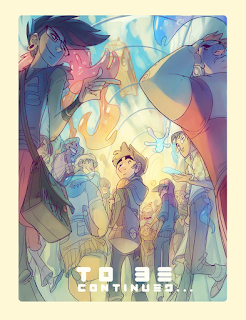 I started in earnest on my Jellybots comic, self published a little copy and sold it to some of you lovely humans. I hope you liked it :)  I have been trying to find the time and inspiration to keep moving forward on that- it's hard to launch something new from thin air.

I moved back into Providence, switched roommates and apartments, went wandering for a spell and wound up in Ireland to stand on some cliffs over the ocean and remember how small I am and how much bigger God is. I fell in love again and got my heart all broke again. I spoke at the very fantastic Q conference about some of the art & Jesus things I write about around here. I tabled at TCAF, Boston Comic Con and RICC (and found that I *love* tabling and getting to meet people at cons ^_^). I bought a whiteboard.

I learned I actually need glasses.
I confessed implicitly to the internet that the previous pair I wore were fake. Just now. I know. I am kind of a tool.
I'm sorry.

All that, and it still feels like it went by quickly.
Any one of those things could have and should have been a blog entry, but I didn't take the time to think or sublimate any of it. Most of the time, I'm updating my Instagram, Tumblr, or Twitter feeds- but I think there's still a place for this particular art form.
Albeit, this is once again one of those self-indulgent journalley entries- but I feel like I need to set a stone in the ground to commemorate what's past and mark a moment to move forward from.
Hello again.

I was cleaning out my DeviantArt account- another space I've left untended lately. Two years worth of accumulated comments, and I choked up reading them all. It struck me how much of my life has been spent pouring into this space- and how grateful I am that it's meant anything at all to those of you who have stuck with me through all the various ups and downs.
We may not all know eachother personally, but you're part of it. So I wanted to say: Thank You.
Thank you for caring to come watch livestreams, come to cons, order my books and commission me. Thank you for taking the time to comment on comics and doodles, celebrate with me when things have been amazing, and commiserate when things have fallen apart. (That last link is to a sermon I highly recommend if low is the place you find yourself now)

It matters, all of this. At least it does to me. Thank you all very, very much for wandering though it with me.

Autumn is coming. The summer's mean heat is finally starting to cool down, and the quiet of the studio is a welcome break from the madness of the last few months.
It's almost my birthday- I'll be 28. I can't even explain how it feels to finally sit down to write again. Cathartic, and a little melancholy? Good to be home.

I'll leave you with a quote from one of my favorite writers of all time- G.K Chesterton. He speaks eloquently about all matters spiritual, and also a snippet of my talk from Q where I make a hamfisted job of trying to do the same.

Because this is all just work, and just art, and just a blog on the internet, just another year and just another cup of coffee- but it is also not "just" anything at all. It can be more, if we let it be.

“Fairy tales say that apples were golden only to refresh the forgotten moment when we found that they were green. They make rivers run with wine only to make us remember, for one wild moment, that they run with water.” -GK Chesterton, Orthodoxy

"Nothing is “Just” anything- and we need concept artists and geeks who care- and bakers who care, and plumbers who care, and civil servants, and teachers, and doctors and electricians who don’t believe anything is “just” anything. That it can matter- and it will because we care about it. Because we’re invested and we aren’t going to give up on it." -Just Me


(The full transcription of that talk is here)


So cheers, guys- to not-giving-up-on-anything. To another year and the hope that God will see us through another series of seemingly unconnected glories and failings that manage to amount to something beautiful and more than just the sum of their parts. I'll be seeing them through new glasses.
I hear the trees have leaves.

May God bless and keep you.

I'm sure I'll be back soon


*
fanart created by me of my friend Francis Boncales' character Aurinko, on a recent twitch stream,
A video of the process is here.
Posted by Nicholas Kole at 3:50 PM

Thank you for your thoughts. I love your work (and feel a kinship with you because I was born in Warwick), and am glad being a disciple is so truly tied into your work and who you are. Keep doing art, you're an inspiration to me when I feel like I'm never getting any better. God bless.

I missed reading your blog posts, Mr. Kole! Keep up the great work!

Thank you for giving posts and articles were very amazing. I really liked as a part of the article. With a nice and interesting topics. Has helped a lot of people who do not challenge things people should know. You need more publicize this because many people. Who know about it very few people know this. Success for you....!!!

God bless you Nicholas! This was truly encouraging! Jeremiah 29:11